HOME > THE HISTORY OF CASTLE SHANNON 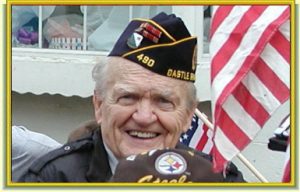 The people who colonized Southwestern Pennsylvania were mostly of Scotch-Irish decent and the area that became Castle Shannon was no exception. Land patents to established boundaries were first issued in 1784 and it was stylish to name ones property. Some of these patent names showed religious inclination, as in “Jerusalem” and “Gilead”; the others incorporated the owners name as in “Cool Castle” and Hulse’s Walk,” David Strawbridge commemorated his Irish roots by naming his farm “Castle Shanahan.”

While records of the era are poor, there is a distinct possibility that David Strawbridge was the nephew of Robert Strawbridge, a founder of the Methodist Church in America.

David Strawbridge’s farm was mostly along what is currently Poplar Avenue to Castle Shannon Boulevard, then up to Shady Run. He died in 1792, with no male heirs, so his property was left to his only unmarried daughter, Jean. She sold the parcels of the original patent to her sister’s families.

Many of the founders are buried in either Bethel Church or St. Clair Cemeteries, as most were Presbyterian. The majority were farmers, who lived on what they grew and used rye as their cash crop. A common feature of each farm was a still, used to make whiskey from the rye for barter. As such, they probably held strong convictions during the Whiskey Rebellion in 1794. Little Saw Mill Run was a thriving stream prior to the current century, powering both a gristmill near Castle Shannon Boulevard and a sawmill at Hamilton School.

At first this area was claimed by both Pennsylvania and Virginia, so each of the founders established their claim by petition whichever state was more convenient. The greater area became known as Lower St. Clair of Washington County, and then was repositioned into Allegheny County in 1797. The local citizens petitioned for years to break away from Lower St. Clair and in 1844 Baldwin Township was formed. Baldwin contained most of the South Hills. With different areas developing their own characteristics by the 1870’s this area had become know as the Village of Castle Shannon.

The first of the railroads to connect Castle Shannon to Pittsburgh was completed in 1872, the same year that a Mr. McCully laid out his street plan for the village. This included all the streets named after trees, plus two named as reminders of the Civil War, Union and Columbia. People wishing to buy lots in Castle Shannon came out by way of train to a carnival style raffle.

There were other reasons to take the many trains out to Castle Shannon. Linden Grove was built as an attraction to German picnickers, as were several other groves patronized by various ethnic groups. Wagons with benches met picnickers at the train station and took them to whichever grove catered to their nationality. Greeks traveled to Sleepy Hollow, where a Greek family tenant farmed, Polish picnickers used Adams grove near St. Francis, Lithuanians and Serbians also picnicked along the top of Hamilton Road. A zoological garden was developed by Professor Bagley in the area of Arch Street and the woods beyond it. Arlington Park, now in Mt. Lebanon, was developed as a campground for Methodists throughout Pittsburgh. Edd Hale, with his metal detector, has recently discovered a trail between Arlington Park and the Methodist Church containing artifacts traceable to the nineteenth century.

Coal mining became a major industry in the late nineteenth century, along with a growing floral industry, brought a large wave of immigrants to the area. These immigrants live mostly in company houses built within walking distance to either the mines or the greenhouses. The village grew into a center for shopping and entertainment for the South Hills. There were numerous grocery stores, hotels, a theater department store and more. The First National Bank was founded and was the scene of a fatal robbery in 1917. The need for spirituality was met by the founding of St. Anne’s Roman Catholic Church, the United Methodist Church, Emmanuel Lutheran Church and the First Presbyterian Church. The little farming community had grown into a town of it’s own.